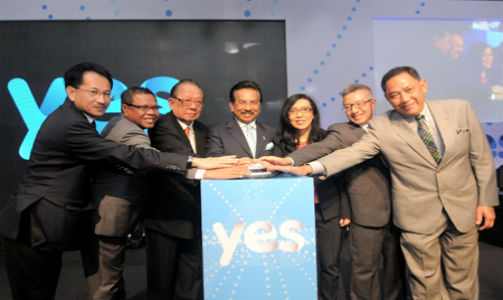 At the launch, Dato’ Yeoh Soo Keng shared, “When we started building our 4G network infrastructure, we made sure that we would cover the urban and rural areas throughout Malaysia in our network rollout. We began connecting Sabah to the Yes network since 16 September 2013, in conjunction with the 50th anniversary of Malaysia Day. I am pleased to share that, to date, more than 60% of the population in Sabah can enjoy the same world-class Yes 4G services as the rest of the Malaysia.”

The MoU between the two parties is to establish a 4G campus-wide network at Universiti Malaysia Sabah to ensure university students have easier access to the Internet for learning and research purposes. This marks the first step in a long run to further drive the transformation of the national education system towards global standards.

According to Dato’ Yeoh Soo Keng, “Through the Education Partner Program, we believe that this will help build a new generation that is progressive, innovative and skilled in ICT to bring about a positive impact to the development in Sabah and in the country.”

Earlier in the same day, YTL Communications organised “Hari Profesionalisme 1BestariNet Peringkat Negeri Sabah”, a state-wide educational awareness event which was also held at Universiti Malaysia Sabah. 2,070 headmasters and head teachers from 690 primary and secondary national schools in the Kota Kinabalu district turned up at the event, where they had a more hands-on experience at the workshops on ways to enhance and complement teaching and learning techniques while streamlining administrative duties through Frog VLE platform. This event will help move the Malaysian education standard to embrace the ICT age. It is also in line with the 10th Malaysian Plan to improve the quality of learning in the schools in the country.

1BestariNet is a project under the Malaysian Ministry of Education to connect all 10,000 primary and secondary government schools in Malaysia with Yes 4G connectivity and a cloud-based virtual learning environment called Frog VLE. Rural and urban schools are now connected together where the students will have equal opportunities to thrive in a knowledge based economy, thus creating a level playing field for everyone. Within the schools, a built-in content filter provides a safe learning environment to ensure that students are unable to access inappropriate content through the Internet. Only educational websites approved by the Ministry of Education will be allowed to pass through the content filter.

The event – the first of its kind in Sabah – is aimed at empowering school leadership to drive the use of technology forward in schools and fostering increased collaboration efforts and the sharing of best practices among neighbouring schools. Hari Profesionalisme will also be held consecutively in Sandakan, Tawau, Beaufort and Labuan to cater to all 1,315 government schools across Sabah and the Federal Territory of Labuan.