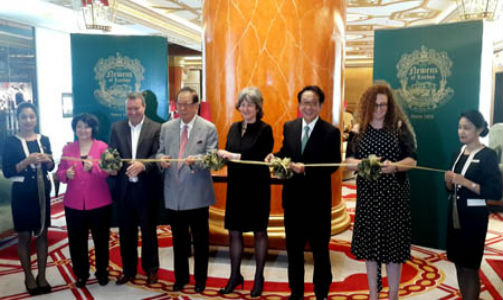 They were first discovered by Tudor King Henry VIII who declared them so delicious the recipe was kept secret for 200 years.

Now a British tea house has brought historic Maids of Honour to Malaysia for the first time, with the launch of Newens Tea House at Starhill Gallery.

Afterwards guests were invited to enjoy Newens’ Maids of Honour tarts at the art-deco inspired venue.

Afternoon tea, Newens pies and other delicacies, freshly baked on-site were also served alongside 60 varieties of specialist teas from exclusive stockists around the world.

Speaking at the event, YBhg Tan Sri Dato' (Dr) Francis Yeoh said: “We are proud to announce that Newens Tea House of London has been included in our portfolio, being brought from Kew Gardens, London exclusively to Starhill Gallery.

“This demonstrates the level of confidence that global luxury brands have in Kuala Lumpur’s dynamic growth and of Starhill Gallery's vision in particular.”

It was the first time Maids of Honour tarts - which are baked using traditional methods and to a secret recipe which has been passed down through five generations of the Newens family - have been baked outside the UK.

The Newens story started over 500 years ago with Tudor King Henry VIII, one of England’s most famous monarchs.

According to history the King came across Lady Anne Boleyn, who would become the second of his six wives, eating the tarts baked by one of her Maids of Honour.

The King was so captivated by the taste of the Maids of Honour, he declared they should be made only for the Royal Court and put the recipe - and the maid - under lock and key.

The recipe remained secret until 18th century when it was leaked by a palace cook to a bakery in Richmond, west London, where Robert Newens later served his apprenticeship before starting the Newens family business in 1850.

Newens now plans to expand the tea houses across south-east Asia bringing the Newens Tea House experience to a new consumer base across the region. 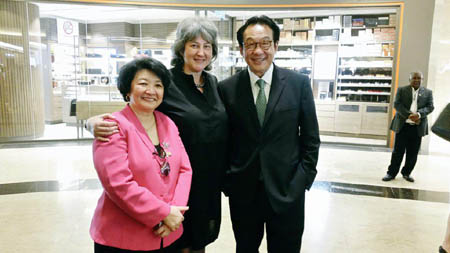 Members of the media

The iconic Starhill Gallery is Kuala Lumpur’s ultimate statement of style and taste in fashion, jewellery, time pieces and cuisine.  As a premier shopping destination, Starhill Gallery is unparalleled in its offerings of rich experiences and provides a standard of privacy and exclusivity rarely offered in large shopping complexes.

In recent years, Starhill Gallery has received numerous accolades and was listed by The New York Times as one of the Top 31 Places To Visit due to its modern architecture, elegant design, high fashion, classical music, captivating art, delectable cuisine, sophisticated culture and stellar events. With its crystalline skin of glass and stone panels, it has was also recognised as Asia’s Most Beautiful Mall by the Forbes Traveller Magazine, a recognition which is echoed by all those who walk through this one of a kind shopping destination.

The seven themed floors encapsulate a variety of rich experiences together with unparalleled dining experiences and house ten of Malaysia’s largest global and flagship stores and many of the world’s most renowned brands including:

Dior; the only boutique by the House of Dior in Malaysia, doubling their previous footprint.
Exclusive time pieces and jewellery brands such as Jaeger LeCoultre, Damiani, Gubelin,  Bedat & Co., Garrard and Samer Halimeh of New York.

Breguet; the first boutique of its kind in Asia.

All of these demonstrate the level of confidence that global luxury brands have in Kuala Lumpur’s dynamic growth and of Starhill Gallery's vision in particular.  Starhill Gallery pays tribute to — and continues to enhance — a rich legacy of exceptional experiences.

In light of this and inspired by the continued evolution of our brands and trends, we are proud to announce that Newens Tea House of London has been included in our portfolio, being brought from Kew Gardens, London exclusively to Starhill Gallery and nowhere else in the world. Newens of London has chosen Starhill Gallery in Kuala Lumpur as a showcase for its glorious history in offering an exceptional experience in the finest of tea houses.

The rich history of Newens Tea House spans more than 150 years, with the history of the recipe dating even further back to King Henry the Eight and since the 1940s the business has grown from strength to strength, enticing legions of royal visitors and tourists alike, approximately 30% of whom hail from South East Asia and make a point to visit when they are in London, to savour the homemade ‘Maids of Honour’ tarts, sumptuous cakes, time-honoured English meat pies and traditional afternoon tea sets.  Devotees of this tea house include Asian Royalties, Winston Churchill, Angelina Jolie, Brad Pitt, Simon Cowell, Jaime Oliver and many more.

We are indeed delighted to welcome the spirit of regal British experiences, made relevant for the 21st Century, and celebrate history in the making with the launch of Newens Tea House’s first international outlet, located exclusively at Starhill Gallery, Kuala Lumpur.

Thank you and God bless you.