Revenue for SGREIT group declined marginally by 0.4% to S$48.6 million in 3Q 2014 mainly due to lower contributions from China and Japan, partially offset by the rest of the portfolio. Net property income (“NPI”) for 3Q 2014 increased 4.1% over 3Q 2013 to S$39.6 million, mainly due to the lower operating expenses incurred, positive rental reversions for the Singapore portfolio and David Jones Building in Perth, Australia, partially offset by lower revenue from Renhe Spring Zongbei in Chengdu, China, loss of income contribution from Japan divestment in March 2014 and net foreign currency movements. 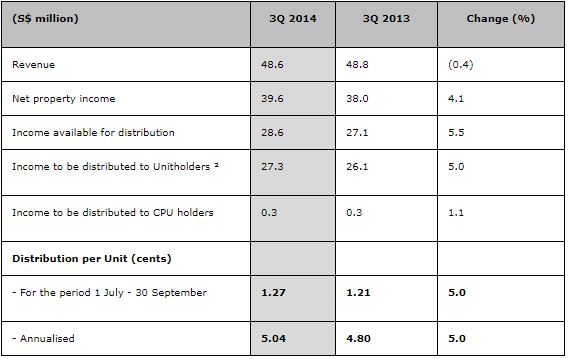 Tan Sri Dato’ (Dr) Francis Yeoh, Executive Chairman of YTL Starhill Global, said, “Our balanced portfolio of prime retail assets has shown its resilience against the uncertain economic backdrop resulting from recent geopolitical events and government policies. We will continue to sharpen our portfolio and leverage on our strong financial standing to seek out opportunities in our core markets.”

Mr Ho Sing, CEO of YTL Starhill Global, said, "As part of our proactive capital management strategy, we have successfully refinanced RM330 million medium term notes (MTN) ahead of maturity in June 2015 at a lower effective interest cost of 4.75%3 per annum up to September 2019, as compared to the previous coupon rate of 5.35% per annum. SGREIT’s overall capital structure has been further improved with the extension of average debt maturity from 3.2 years to approximately 3.6 years. The Group has no refinancing requirement until July 2015, where the maturing S$124 million MTN is covered by available undrawn committed credit facilities and/or untapped balance from our MTN programme. SGREIT’s borrowings are fully fixed or hedged via interest rate swaps and caps, minimising the impact of any significant interest rate increases.”

Added Mr Ho, “SGREIT’s portfolio continued to perform, underpinned by a high portfolio occupancy rate of 99.1% as at 30 September 2014. Wisma Atria continued to see strong shopper traffic growth of 6.3% y-o-y to 6.8 million in 3Q 2014 and its retail tenant demand is demonstrated by a 6.7% rental reversion for leases committed in 3Q 2014. Our Australia portfolio has also benefited from the increased rental rate from key tenant David Jones, following its lease review in August 2014. We have been working with the City of Perth for the redevelopment of Plaza Arcade, in line with its plan to rejuvenate the CBD shopping precinct.”

SGREIT’s Singapore portfolio, comprising interests in Wisma Atria and Ngee Ann City on Orchard Road, contributed 67.1% of total revenue, or S$32.7 million in 3Q 2014.  NPI for 3Q 2014 increased by 3.8% y-o-y to S$26.0 million, led by positive rental reversions for both the retail and office units.  Revenue from Ngee Ann City Retail gained 0.6% y-o-y while NPI increased 0.8% y-o-y. Wisma Atria Retail revenue increased 0.1% y-o-y and its NPI grew 6.2% over 3Q 2013 on the back of lower operating expenses. Wisma Atria Retail achieved positive rental reversions of 6.7% for leases committed in 3Q 2014. Shopper traffic increased by 6.3% y-o-y and 5.2% from the previous quarter to 6.8 million in 3Q 2014. For the nine months to September 2014, shopper traffic was 4.0% higher compared to the corresponding period in 2013. Tenant sales at Wisma Atria decreased 8.7% y-o-y, reflecting the ongoing repositioning of the mall in which approximately 8.0% of the mall’s net lettable area underwent tenant transitions and renovations, coupled with a decline in tourist arrivals and softer retail sentiments during the quarter. The Singapore office portfolio maintained high occupancy, achieving 8.8% positive rental reversion for leases committed in 3Q 2014, on the back of healthy leasing demand and limited upcoming supply of office space in Orchard Road.

SGREIT’s Malaysia portfolio, comprising Starhill Gallery and interest in Lot 10 along Bukit Bintang in Kuala Lumpur, contributed 15.4% of total revenue, or S$7.5 million in 3Q 2014.  NPI for 3Q 2014 was approximately S$7.5 million, 3.7% higher than in 3Q 2013, largely due to lower expenses as a result of a one-time property tax rebate and reversal of property tax provision made in 1H 2014, following a revised assessment in 3Q 2014. A new pedestrian bridge from Bukit Bintang Monorail station was completed in September 2014, providing shoppers direct access to Level 1 of Lot 10. The new Lot 10 Sports Hub, which showcases international sporting brands including Asia’s first Liverpool FC boutique, was also officially launched during the quarter.

SGREIT’s Australia portfolio, comprising the David Jones Building and adjoining Plaza Arcade in Perth, Western Australia, contributed 10.4% of total revenue, or S$5.0 million in 3Q 2014. NPI for 3Q 2014 was S$4.0 million, an increase of 8.7% y-o-y. The growth was mainly due to the positive rental reversion on the leases for David Jones Building including the 6.12% rental uplift following David Jones’ lease review with effect from 1 August 2014. The asset redevelopment plans to optimise upper-storey space at Plaza Arcade have been submitted to the City of Perth and we are currently awaiting approvals. CBD retail space remains in demand for retailers seeking a presence in Perth with the recent openings of Topshop and Zara in the CBD shopping precinct.

Renhe Spring Zongbei in Chengdu, China, contributed 4.8% of total revenue, or S$2.3 million in 3Q 2014. NPI for 3Q 2014 was S$1.3 million, a decline of 20.4% from 3Q 2013, an improvement from the 35.7% decrease in the previous quarter. The decline was largely attributed to lower revenue amidst contraction of the high-end and luxury retail segment resulting from the central government’s austerity drive and intensified competition from new and upcoming retail developments in the city. Notwithstanding the above, Renhe Spring Zongbei remains focused  in fine-tuning its tenancy mix aimed at increasing its VIP customer base, while continuing to employ cost containment efforts.

In 3Q 2014, SGREIT’s Japan portfolio, which comprises five properties located in central Tokyo, contributed 2.3% of total revenue. NPI for 3Q 2014 was S$0.8 million, 67.0% higher than in 3Q 2013, mainly due to the reversal of rental arrears provision in 3Q 2014, partially offset by the depreciation of the Japanese Yen against the Singapore Dollar and the loss of income contribution from Holon L which was divested in March 2014.