Emmanuel Macron, Donald Trump and a moment for optimism 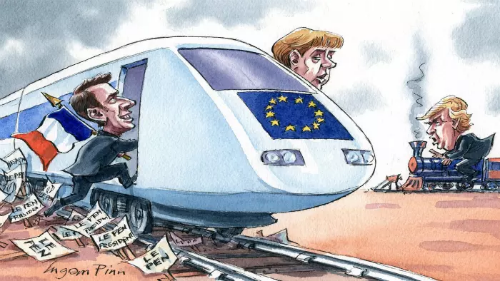 There are politicians and there are leaders who change the weather. France’s Fifth Republic has had its share of politicians. In Emmanuel Macron it has now chosen a rainmaker as president.

At this point, it is almost mandatory to list the ifs and buts. France is a deeply divided nation (I thought that was what happened at elections). A touch above a third of the voters felt driven to cast their ballot in favour of Marine Le Pen’s noxious National Front. Mr Macron’s En Marche! has yet to win seats in the National Assembly. Powerful trade unions are lined up against any proposals for economic modernisation. Remember Barack Obama’s “Yes We Can”? Well, Americans have now put Donald Trump in the White House.

Cavils and caveats are inevitable, but their constant enunciation even before Mr Macron has crossed the threshold of the Elysee Palace speaks to the collapse of faith in politics. The ancien regime is gripped by fatalism — watch Britain’s moderate Labour MPs hurl themselves over the cliff rather than confront their hard-left leader Jeremy Corbyn. If nothing else, Mr Macron’s victory ought to restore a measure of confidence to politics, in France and beyond. Leaders with the courage of their convictions can change things.

The digital age holds other temptations for commentators. It too often demands that the world be described in grand sweeps. Thus Mr Trump’s elevation to the US presidency signed the death warrant of liberal democracy. Mr Macron’s spectacular success has brought it back to life. The real world is not quite so obligingly neat.

In a continent drenched in pessimism, Mr Macron’s victory should be celebrated as indeed spectacular. Not much more than a year ago he was a minister in François Hollande’s failing administration. He dumped the president and the Socialist party to create the En Marche! movement. That took resolve. Still more impressive than the fact of his success was the substance and manner of his campaign.

Politicians have run scared of the populists — afraid to defend the open, tolerant internationalism that has underpinned European peace and prosperity. Mr Macron made no such apologies. He put openness, Europeanism and economic modernisation at the heart of his campaign. Europe’s anthem Ode to Joy played at his victory celebration. Contrast this with the fearful nationalism that compels Theresa May’s British government to haul down the EU flag.

The president-elect set out the pivotal choice of our age, that between competing and retreating — the French choice between exceptionalism and Poujadism. He won. More Europe means more France. Those who quibble about the margin of his victory might recall that Mr Trump lost the popular vote to Hillary Clinton and the Brexiters won by only a sliver.

In Washington this week, I heard comparisons drawn with Mr Trump. Both presidents in their way are insider-outsiders; both upended their respective political establishments. And, if you want to continue the analogy, Mr Trump has found himself constrained by realities just as Mr Macron will now confront the harsh truths of a fractured France.

Superficially attractive, these parallels say very little. Mr Trump arrived at the White House with no more than a set of prejudices, as seen in the capricious chaos that reigns in his administration. You do not have to share Mr Macron’s convictions to see he has a strategy.

European democracy now has two powerful champions. Not so long ago Angela Merkel’s unapologetic defence of liberal values during the migration crisis threatened to break her grip on power. Now, all the signs are the German chancellor is heading back for a fourth term in the coming autumn elections.

Plenty of tussles await Europe’s two leading politicians. I have no doubt that Ms Merkel will cling to the economic orthodoxy that can suffocate weaker economies. She has already warned that “German support cannot replace French policymaking”. Mr Macron will struggle at once to push through his reforms at home and persuade Berlin that a monetary union needs an economic framework. But argument and compromise have always been the way of Franco-German co-operation.

The continent’s two leading powers are now pulling in the same direction. For Mr Macron the reinvigoration of France and the restoration of faith in European collaboration are indivisible. Ms Merkel has long complained that, in the absence of a serious French partner, Germany has carried the burden of European leadership. Mr Macron’s prospectus comes at a price. But Berlin cannot afford to let this opportunity slip.

Mr Trump caught a tide. The financial crash, stagnating incomes, the insecurities and dislocations of technological advance and globalisation and, yes, the insouciant indifference of elites to the fate of the-left behind, has corroded faith in the institutions of liberal democracy. The US president has no answers to the challenges. To the contrary, he heads an administration in thrall to its own set of plutocrats.

Mr Macron presents a moment of optimism. He is a reminder that voters are still prepared to listen to a reasoned case. His success is not predestined, but nor is his failure. There is life yet in liberal democracy. The Brexit rupture aside, Europe looks in better shape than it has for some time. Now it has the promise of leadership.