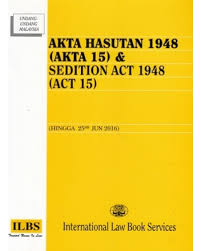 We are sending a seriously flawed message if those who are perceived to be close to the government are spared the full wrath of the law.

IF anyone of us is stupid or crazy enough to call for the burning of the Quran, we can be sure that the person would be immediately hauled up and charged with sedition. And rightly so, too.

If the call were to be made by a non-Muslim, whether a politician or even an ordinary individual, we wouldn’t dare to think of the consequences. Such is the fragile nature of anything to do with religion.

But in the case of Perkasa chief Datuk Ibrahim Ali, who has called for the burning the Malay language Bible, a fact which he has not even denied, he is let off scot-free.

More incredibly, he has the privilege of having a minister to defend him in the Dewan Rakyat, when she reportedly said the decision not to charge Ibrahim under the Sedition Act was made “fairly and without favouring any parties to ensure justice for the victim, witness, accused and the public.

“The decision by the Attorney-General’s Chambers to not prosecute Ibrahim was because the context of his speech was in line with the spirit in Article 11(4) of the Federal Constitution.

“Hence, the decision to not charge Ibrahim was taken after considering the outcome of the investigation by the police.”

We do not know whether Nancy Shukri, the de facto law minister, knew what she was reading out, but any level-headed Malaysian would surely not accept her reasoning.

With the slew of recent sedition cases over a wide variety of issues, can Malaysians be blamed if they are sceptical over how the law is applied without fear or favour? Or are there different laws for different people? Or do we simply accept that Perkasa, despite the controversial racial and religious stand its leaders have made, has special protection from the authorities and is immune from prosecution?

According to one media report, “Nancy hoped that people could see the government’s transparency in handling the legal process and for them to stay calm and not to issue statements or do things that could undermine harmony and hurt the feelings of the country’s multi-racial community”.

Oh yes, thank you very much. Of course, Ibrahim has not issued any statement that can be deemed as undermining harmony and hurting the feelings of the other races. It’s very convincing and we are supposed to accept all this without questioning it.

This writer has consistently written that it is not just the politicians, retired politicians and individuals who have been playing with fire. Because they seem to be able to get away with their inflammatory remarks, even ordinary Malaysians are joining in the fray.

These people from all races are spewing clearly racist remarks without much thought. The seditious remarks on social media, especially Facebook and certain blogs, have gone out of control because they think they can never be arrested.

One retired politician incredibly claimed in a blog that the Chinese were the biggest giver of bribes in this country. Obviously he has not heard of the reported practice of money politics in political parties, including Umno, which has been brought up by party leaders themselves. And what about the takers? There can be no bribery without the giver and the taker.

Surely there are elements of sedition in such claims when they are not substantia­ted by any evidence except for a sweeping racist accusation.

We are sending a seriously flawed message if those who are perceived to be close to the government are spared the full wrath of the law. It will give rise to accusations, even if they are not justified, that there is a selective form of prosecution involving sedition cases.

This writer has gone on record to support the existence of the Sedition Act to stop extremists from making remarks that can threaten racial harmony.

Many of us in our 50s or older have seen how dangerous the effects of a racially charged environment can be for this country, what more if religion also comes into play. That is why most of us know we have to be sensitive in what we say or do.

The irony of the situation is that even Ibrahim agrees that the Sedition Act should be kept intact, but that has not stopped him from making outrageous remarks.

He also has the company of controversial lecturer Ridhuan Tee aka Tee Chuan Seng, who reportedly claimed that “Malaysia did not have the characteristics of an Islamic country due to the increase in the number of temples and churches”.

And we do not know whether to laugh or cry at Ridhuan’s latest column where he raised his concerns over there being more pigs in this country than other livestock.

Many of us would certainly like to know whether such remarks will foster greater racial and religious harmony. Just do a Google search and judge for yourselves how many of Ridhuan’s statements are seditious.

He has been investigated by the police before and even moaned that no one came to defend him the way they stood up for Universiti Malaya lecturer Azmi Shahrom. Well, Ridhuan should just be thankful that he has not been charged.

Under fire from critics, Nancy, a first-term minister, repeatedly told her Twitter followers that she had “never defended” Ibrahim but was merely passing the message by government agencies on what actions had been taken against the outspoken Malay rights group leader.

And in a report in The Borneo Post, the minister stressed that she does not support Ibrahim Ali and would never agree with any religious or racist action against non-Muslims.

Nancy said she grew up in Sarawak in a multi-racial family and as such, race and religion were non-issues to her.

“I never dreamt that one day I would be branded as someone who is anti-Christian or a supporter of those calling for Bible burning,” she said in the report.

Well, Malaysians, especially Sarawakians who pride themselves as the model for inter-racial and religious harmony, expect her to do better. She shouldn’t be reading an answer that she does not believe in, and she would not get any respect for defending herself on the sidelines. As a public official, what she says in public must be consistent with what she says in private.

In our parliamentary system of demo­cracy, we understand that the ministers have to depend on the civil servants to supply the answers to many of the questions raised by the MPs. But once these answers are in their hands, they have to take full responsibility for what they say.

The same applies to ministers or CEOs who make speeches at public forums. You cannot blame the civil servant or the speech writer.

Our diversity is our strength, and we should be thankful that the majority of our people want a peaceful and harmonious society. But justice is blind, and as a nation where the Rule of Law is paramount, we want to make sure that justice is dispensed fairly, without fear or favour.

As the highly respected British judge Lord Hewart said way back in 1923, “Justice should not only be done, but should manifestly and undoubtedly be seen to be done”.

>The views expressed are entirely the writer’s own.