NGO: Malaysia did its best for rhinos 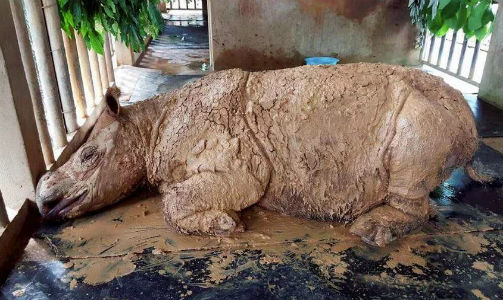 By Avila Geraldine and Olivia Miwil

MALAYSIA has done its best to save the Sumatran rhinoceros since the 1980s, including mooting breeding programmes and pursuing conservation collaborations with key parties – all to no avail.

Borneo Rhino Alliance (Bora) executive director Dr John Payne said while the federal and Sabah governments had exhausted all avenues to save the species, the same could not be said for others.

He said there were opportunities to save the species, which were rejected by "people in positions of authority".

Payne took aim in particular at experts with the International Union for Conservation of Nature (IUCN), the world's main authority on the species' conservation.

He said that in 1984, IUCN experts had argued that only non-breeding Sumatran rhinoceroses shoud be brought into a globally-managed breeding programme.

"I am particularly disappointed that a letter of intent for collaboration signed by key parties in 2012 has been ignored by all parties, except the governments of Malaysia and Sabah, as well as Bora, despite our repeated attempts to engage," he said.

The meeting was said to had borne fruit with the proposed collaboration initially due to be inked in September. But the signing of the memorandum of understanding (MoU) is pending.

Prior to the visit, the Sabah government had initiated efforts to push for a collaboration with the republic.

"Malaysia is ahead of Indonesia in many aspects of Sumatran rhinoceros conservation. The long-awaited MoU is now needed more than ever.

"Malaysia and our colleagues in Germany, Italy and the IPB (Institut Pertanian Bogor) University have much to offer, not least in the management of female Sumatran rhinoceroses with reproductive pathology, safe harvesting of gametes from living rhinoceros and cell culture, as well as capture and translocation of Sumatran rhinoceroses from remote areas," Payne said.

"Technology already exists to make eggs and sperm from these cultures. Technology to allow embryos of one species to be successfully implanted into the womb of another will be made available to us in the not too distant future. But then, the need for this could have been avoided if the decision makers decided to collaborate from the 1980s."

Iman was the last wild rhinoceros spotted deep in the jungles of Sabah in 2014. She was captured at Danum Valley and was taken to the sanctuary for care until she died.

Meanwhile, WWF-Malaysia chief executive officer Sophia Lim said while little could be done to save the Sumatran rhinoceros, efforts should be made to save other species which face extinction if the threats were not addressed.

She said poaching and illegal wildlife trade were the main threats.

Wildlife crime, she said, was not just a local problem, but part of an international wildlife trade syndicate associated with drug and human trafficking, as well as money laundering.

Lim said the call to set up a Wildlife Crime Bureau within the police was timely to collaborate with international agencies, such as the International Criminal Police Organisation, Traffic International and regional wildlife hubs set up by WWF for Africa and Asia.

"WWF-Malaysia urges the government to boost its effort to eradicate poaching, as well as act fast in bolstering efforts to preserve the remaining wildlife that we have," she said.

She urged the government to gazette forests as either protected areas for wildlife sanctuaries, or forest reserves where harvesting of timber was done in a refined and sustainable manner that allowed wildlife to co-exist.