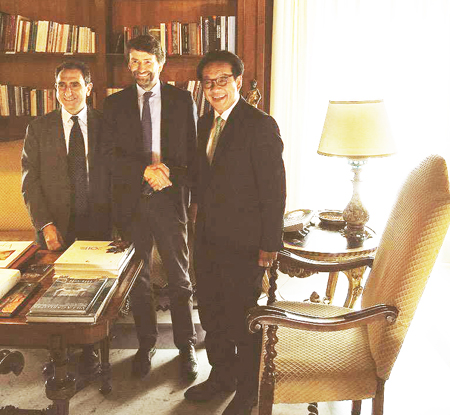 Italy is home to many historical sites, including ancient Roman villas, palaces, monuments, castles, Renaissance squares and fountains which are slowly crumbling to ruin amid neglect and lack of money.

A recent report by The Straits Times stated that with the harsh economic times and limited financial resources of its own, Italy is looking to private sponsors to fund the restoration of many of its huge artistic heritage.

Thus, patrons from the East are lending a hand to invest in Italy and preserve these historical sites and invaluable culture.

"I am honoured to be part of such a prestigious institution as the Teatro dell'Opera, with so much history and tradition. I hope I will be able to help it do even better in the future and outshine itself, by bringing also a wave of innovation through the support of young talents," said Yeoh at a concert in Rome last year.

To mark the entrance of YTL on the Board of Directors of Teatro dell’Opera di Roma, Yeoh offered the city of Rome a gala concert at the Terme di Caracalla in 2015, with all proceeds going to UNICEF. The evening was filled with magnificent music, with the ancient baths as a backdrop, and featured the return of José Carreras, and performances by the tenors Russell Watson and Alessandro Safina, the flautist Andrea Griminelli, the soprano Cynthia Lawrence and the mezzo-soprano Carly Paoli.

Yeoh also played a pivotal part in organising the Music For Mercy concert in celebration of the Jubilee Year of Mercy in 2016. Held at the historical Roman Forum, the free concert was open to the public and featured acclaimed tenor Andrea Bocelli.

The concert brought together artists from different cultures and countries, including Malaysian singer Zainal Abidin, clarinetist Kinan Azmeh from Syria, David Foster, pianist and winner of sixteen Grammy Awards, The Tenors from Canada, Elaine Paige and Carly Paoli from the UK, and Italian singer Giovanni Caccamo.

In December 2016, Yeoh was honored with the ‘Capri Legend Humanitarian Award’ for his philanthropic activity in nurturing and preserving the arts.

In his acceptance speech Yeoh said: "There are thousands of quotes of clever men that allude to the power of music, but for me the most important quote is from God Himself in the book of Zephaniah in the bible. 'God rejoices over us with singing.' Music is the literature of the heart and give us a joy where words cannot reach. Even in a hurting world music can mend many broken hearts."

It was cited by the Straits Times that Rome has already seen two great rescues of historical monuments by Asian patrons in recent years. In 2015, Japanese textile tycoon Yuzo Yagi donated €2 million to restore the Cestius Pyramid, a landmark of the Eternal City built by the Tiber River in the 12th century BC as a tomb for famous magistrate Gaius Cestius.

As more partnerships in the arts involving foreign private companies are built, visitors will continue to enjoy these ancient cities restored to its former glory.